7 Days With Family In Oahu, Hawaii

THIS BLOG IS DIFFERENT than my other ones because family hosted us in Honolulu. Out of the short 7-days we were there, my husband and I spent the most time in Alamoana, the biggest outdoor shopping mall in the US. We went on hikes, sightseeing tours and ate lots fresh Hawaiian Poke Ahi Tuna. 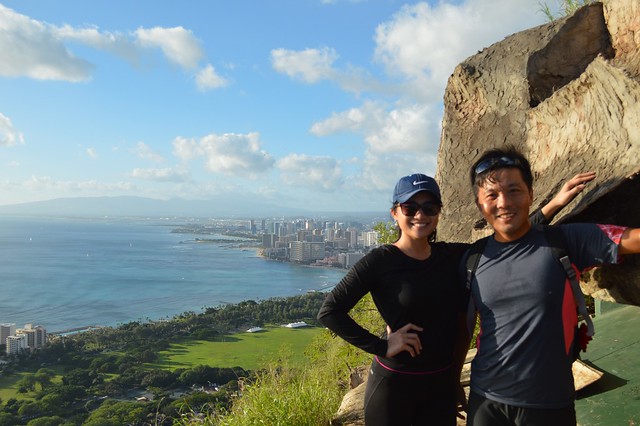 Sometimes called “The Gathering Place,” Oahu certainly lives up to its name. The third largest Hawaiian island is home to the majority of Hawaii’s diverse population, a fusion of east and west cultures rooted in the values and traditions of the Native Hawaiian people.

Being in the US this time of the year meant so much for me. I get to celebrate my 6th Thanksgiving dinner in the last 7 years. It’s also Jovi’s first Thanksgiving, Black Friday, Cyber Monday and the whole shebang experience. I admit we went typical American and gone crazy shopping.

The Jerald Garcia family hosted for us 5 days in their lakeside home in Hawaii Kai, Honolulu. As a wedding present, they also gave me and my husband a one-night stay at Hilton Waikiki. I got to meet and spend a lot of time with my nieces Coco, Matthew and Paolo. Towards the end of the trip, the Sala family toured us in North Shore for some of biggest surfer waves on the planet. As souvenir, they gave us macadamia nuts, chocolates and Kona coffee we would enjoy many months later. It’s true when they say that family and friends are the most important things in life.

Here is our 6-day itinerary in Oahu, Hawaii:

The plane trip from Kauai to Oahu takes less than an hour. Our itinerary started with a generous wedding gift from Jovi’s cousin, Jerald – a night’s stay at Hilton Waikiki. In the afternoon, my husband and I walked the entire Kalakaua street, also known as Honolulu’s version of Beverly Hills.

Shops are closed this day until the evening for Thanksgiving. To kill time, Jovi and I rode the Green Bus Line, ($20 per person) for a 70-minute guided tour bus across Waikiki’s tourist spots. We passed by Diamond Head, Hawaii’s most famous landmark, including The Honolulu Zoo, Waikiki Aquarium, Diamond Head Hike, Kahala Mall Shopping, Surf & Whale Lookout.

We visited the Honolulu Zoo ($14 per person). Here’s some pictures of the African landscape:

We had Thanksgiving dinner in Jerald’s house. We will be forever grateful for his family’s warm welcome and for lending us a spare to drive around. Here’s a picture of the dinner spread:

The Alamoana Shopping Center is the biggest outdoor shopping mall in the U.S. The checkout lines to Bath and Body Works and Victoria’s Secret reached outside the door. Everyone was furious shopping, to which Jovi commented, “This is an American scam to get people buying things they don’t need at prices not even on sale.” Meanwhile, I bought several pairs of 50% off shoes from Clarks.
We had an early dinner at Japan’s Shirokuya. My eyes popped after tasting the sukiyaki – it was so good I ate there two more times in the next two days. There’s a big population of Japanese people in Hawaii, so no wonder Japanese cuisine here is excellent.  No pictures; I got distracted by the food.

I had to work in the morning so our host, Jerald, brought us to his favorite local coffee shop, Island Brew.  I’m starting to notice the high cost of living in Honolulu – $5 for a small cup of vanilla latte. That’s more expensive than in downtown San Francisco!

In the afternoon, Jovi and I hiked the Diamond Head Trail, one of the most recognisable landmarks in Oahu. It was an easy hike with spectacular views which took us little over an hour to finish.

We went back to Alamoana Shopping Center again for more shopping at nearby Walmart and Ross. At night, we had a dinner at Cha-cha-cha Salsaria for a party of ten together with the Garcia and Sala families. I ordered the Surf and Turf burrito – the steak is distinguished U.S. beef. Delicious!

We played 9-holes with the Jerald and our nephews Matt and Paolo at the Hawaii Kai Golf Course. On the way there, we passed this scenic point Halona Blowhole Lookout. 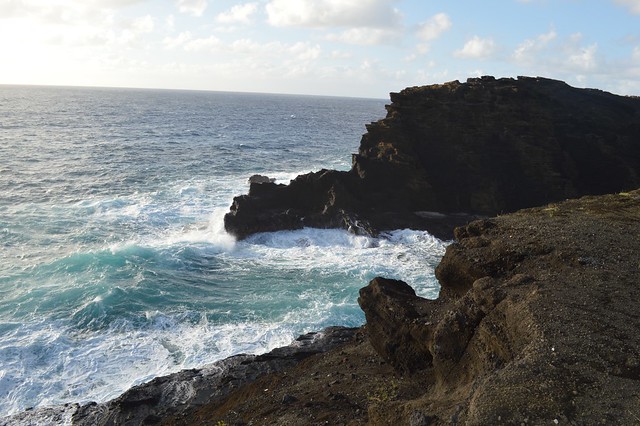 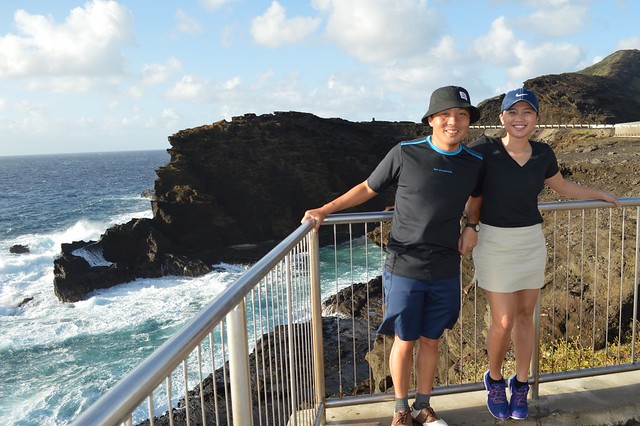 From Hawaii Kai, it took us 40-minutes to drive to the North Shore, known for some of the largest, surfer-friendly waves on the planet. Together with the Sala family, we spent time at Sunset Beach watching pro surfers. 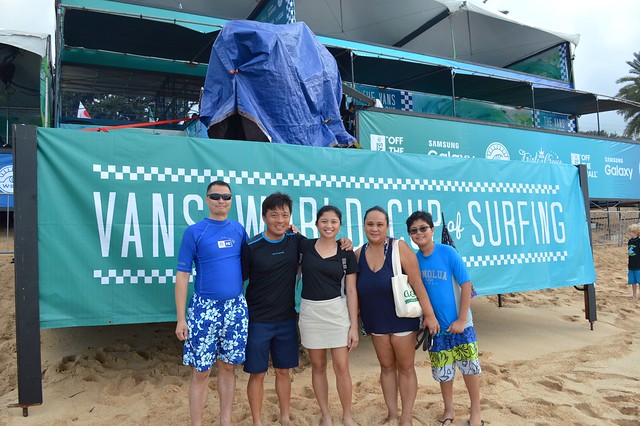 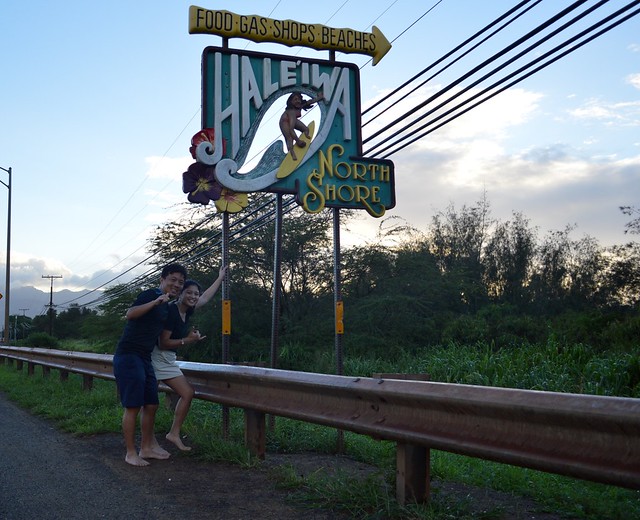 Our dinner was at Old Haleiwa Town where Ric and Lani treated us to Teddy’s burgers.  Jovi and I felt so welcomed by the Salas’ and had a great afternoon catching up.

Instead of going far, we decided to take our last day in Honolulu easy. Sandy Beach was just 10 minutes away. 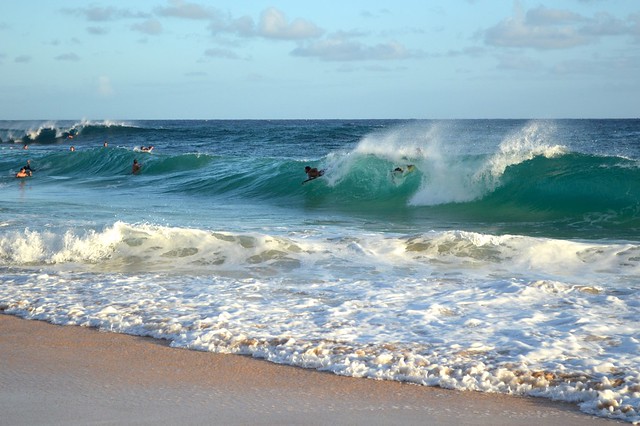 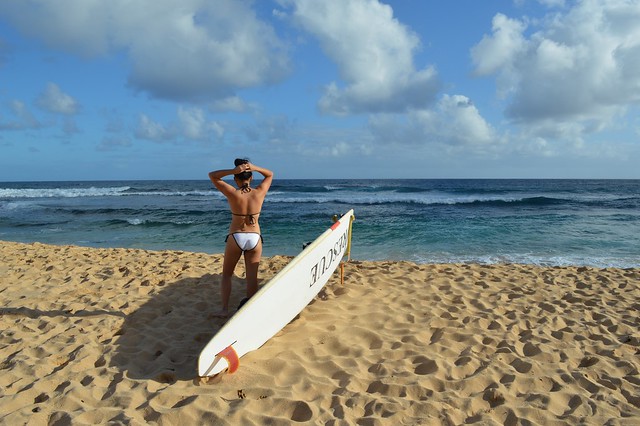 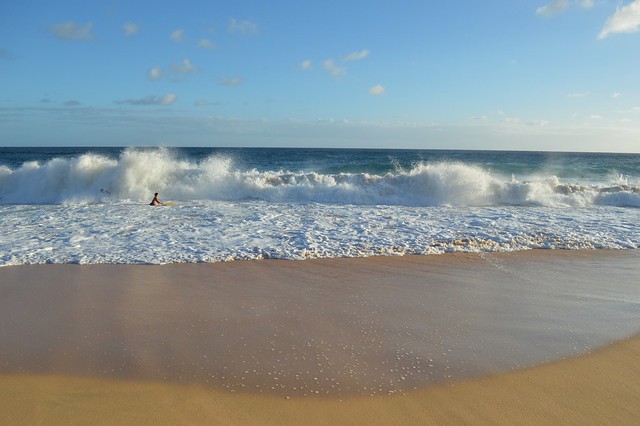 Sticking with our tradition of romantic last-day dinners, Jovi and I ate at Roy’s Original Hawaii. We ordered Black Ahi Tuna, their premier White Fish Dish, a set of appetizers and chocolate soufflé for dessert.

What I wish we did:
The Polynesian Cultural Center at
Grand Island Tour, 8-hour guided bus tour of Oahu

Do you have tips and suggestions for a trip to Oahu, Hawaii? Share in the comments section below.