Warning: "continue" targeting switch is equivalent to "break". Did you mean to use "continue 2"? in /home/edzofcit01/public_html/crystalneri.com/wp-content/themes/prolog/admin/extensions/customizer/extension_customizer.php on line 382
 Crystal Neri | Travel Blog: El Nido and Puerto Princesa, Palawan - Crystal Neri

HERE’S THE 6-DAY ITINERARY OF OUR HONEYMOON trip to Palawan, Philippines. I’m writing about the El Nido and Puerto Princesa highlights such as the Underground River, limestone island-hopping tours, and more. 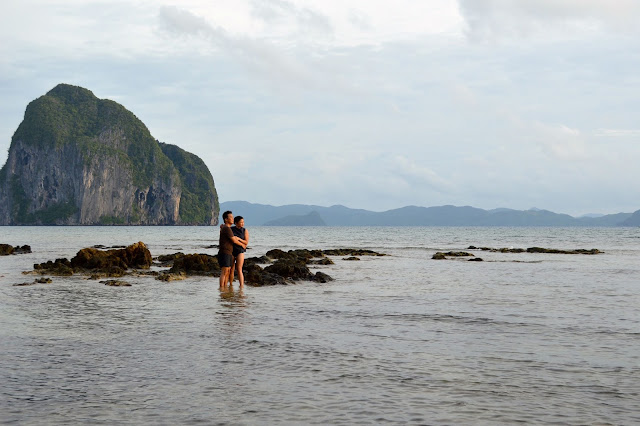 In the last five years, I’ve seen some of the best views of the western side of the planet. So picking a honeymoon destination was too much a high-stress situation we didn’t even touch it for months. In the end, my husband Jovi and I settled on our last pick, Palawan.

“Just go to Palawan,” everyone says, as it is beautiful. There’s a tendency for many of us nowadays that just because we’ve seen a travel destination in pictures we judge it too fast. Palawan turned out to be Jurassic Park kind-of-a-paradise. It’s a dream come true for outdoor enthusiasts like me – limestone islands, aquamarine waters, lush flora and rich fauna, and bursting with adventure side trips.  The tour guides are very well trained; even small details on tour systems are smooth.

While I was there, I was disconcerted seeing the views and disbelieving it is part of my own country where I could speak Tagalog with other Filipinos. Of course, I knew that we have El Nido as a backyard (from Cebu, it takes a one-hour flight and 6-hour drive to get there) but I just did not expect to see as much beauty as I did, finally seeing it with my own eyes.

In one of my usual elaborate conversations with Jovi, we compared walking along El Nido Bayan as our Rome, Italy, limestone island-boating day as Table Top Mountain, Capetown, South America, Bulalacao Falls as the cold spring alternative to Japanese onsens, and more. For the first time in my travels, I felt the sincere care locals and the government have in protecting their land. They are so many rules & verbal warnings on any kind of littering or abuse. “It’s also us protecting our livelihood,” our chirpy underground river boatman said.

What a blessing to experience Palawan today. Jovi and I had the stamina to trek, hike, walk, and swim the best highlights the island has to offer. But the better part? Traveling along with the inner joy of a honeymoon!

Our Palawan trip was arranged for us by Ethel of Destination Specialist. We left on June 22nd from the Cebu Mactan airport to Puerto Princesa, Palawan. Straight from the one-hour flight, my husband and I took the rough 6-hour car ride to El Nido. It’s at the northern tip of the island and driving is the best way to get there. At about 6PM, when we finally reached our destination, I saw this.

The next day, the good people of the Dacuit island-hopping tours brought us along Tour A, called the “lagoon tour.” The first stop on our itinerary for the day is the 7 Commando Beach. 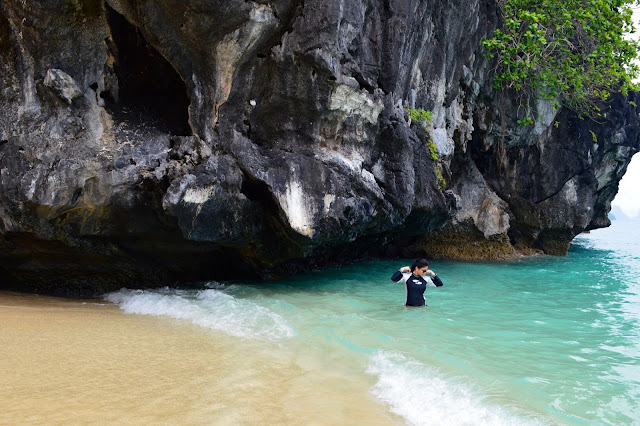 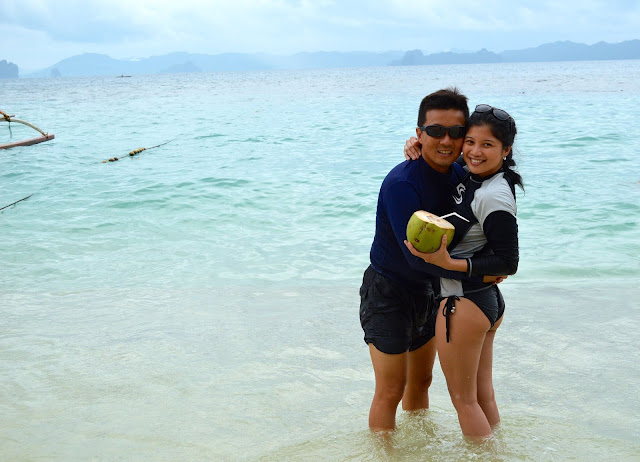 Second is the Big Lagoon, where we went swimming and had grilled seafood, pork, and chicken for lunch. 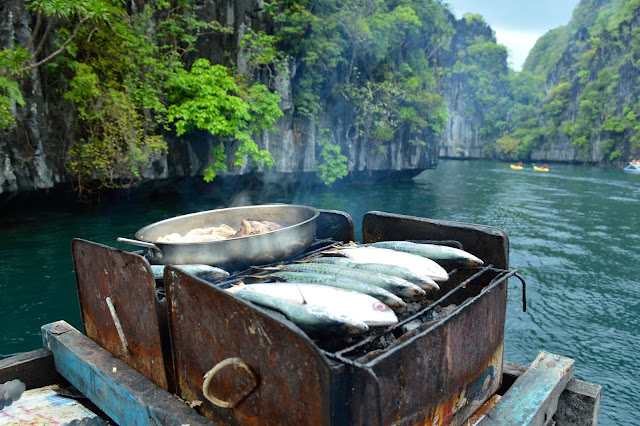 Third and the last stop of the day is the Small Lagoon, a place known for kayaking. We saw a 4-foot monitor lizard, which I failed to take a picture of because I was busy freaking out. 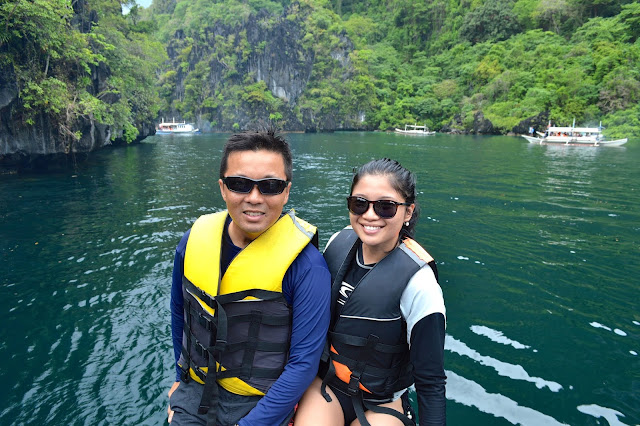 We ended up so bone-tired that Jovi and I ate a huge dinner, pizza and handmade noodles and for dessert, a honey, banana and mango crepe.

The next day was supposed to be “Free and Easy.” But one of our boatmen recommended a guide, Kuya Ronnie, for an Inland Tour. We left Bill Hotel the next day at 10AM. After a 40-minute rough tricycle ride, we hiked for 20-minutes to Bulalacao Falls. 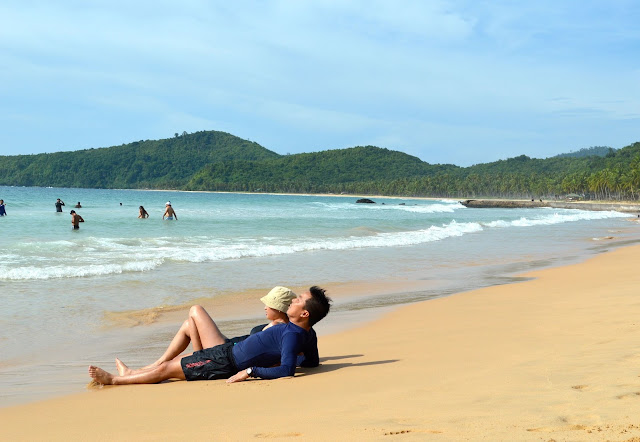 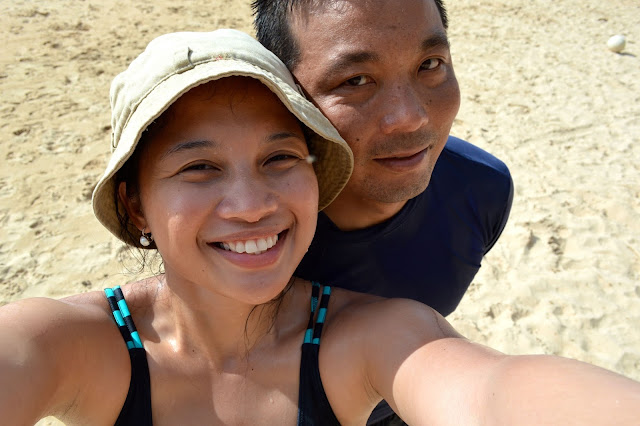 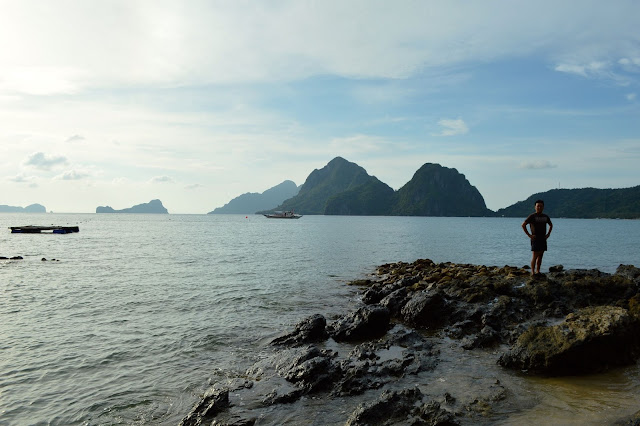 LAS CABANAS BEACH. We stayed for a few hours to catch the sunset because it’s so photogenic. 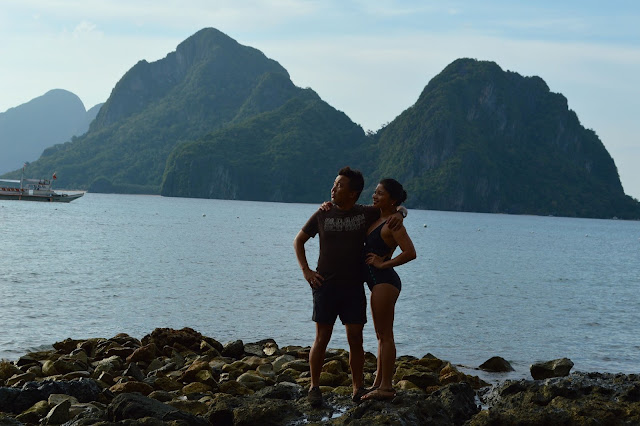 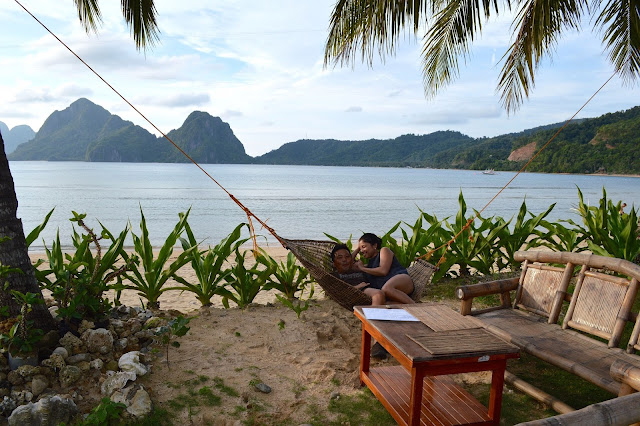 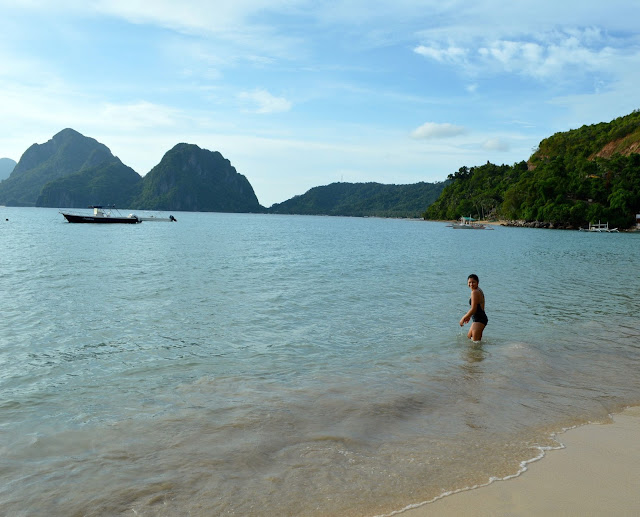 Our van left El Nido at 7AM. By noon, we checked-in at the 4-star resort, Microtel Puerto Princesa. After hours of rest, we are ready for another tour, the Puerto Princesa City Tour.

The stops on the itinerary are Plaza Cartel, where the American massacre happened in 1944; Palawan Eco-Park (home of some of the largest crocodiles in the world; Mitra Ranch (home of ex-senator Ramon Mitra. It had vistas of Honda Bay, farms, ocean views; Baker’s Hill, like a garden theme park with quirky décor and a local bakery selling the best ube hopia I’ve ever tasted. 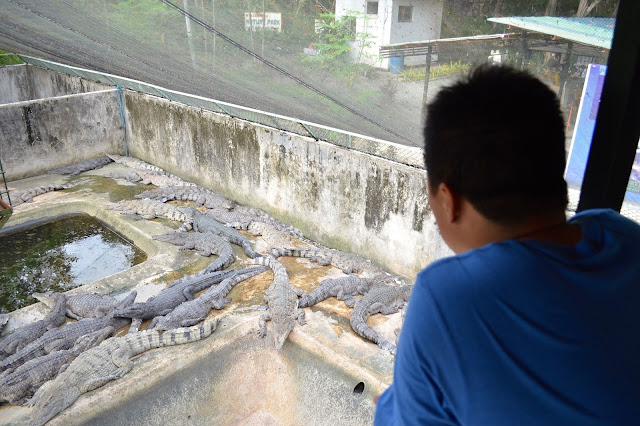 For many, this is the highlight of their Palawan trip. The Puerto Princessa Underground River is the longest navigational underground river in the world. According to Wikipedia, “the cave includes major formations of stalactites and stalagmites. It also represents a habitat for biodiversity conservation and a full mountain-to-the-sea ecosystem and has some of the most important forests in Asia.” 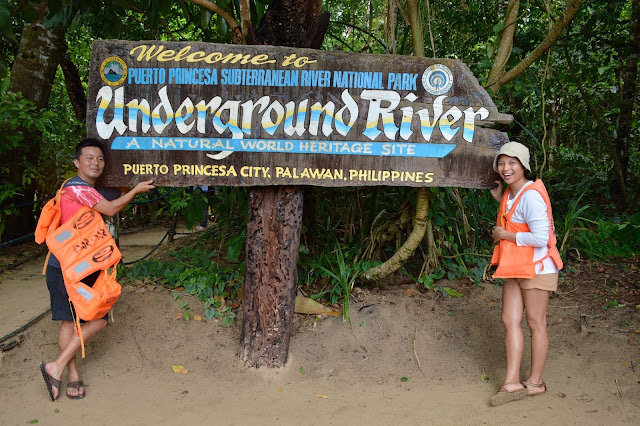 The monkeys in the Puerto Princessa National Park know how to steal plastics in open bags. They would “scout” the place as tourists come in and stealthily run zigzag and steal from the unsuspecting
victims.

Our last tour in Puerto Princessa was the Firefly Tour. It is located in Barangay Iwahig, a 20-minute drive from the main town. It goes like this: you go around a 1.5-kilometer longs wamp in a small, 3-person boat. When the boatman flashes a red light, you’ll see Christmas lights like flicker on the mangroves. It’s the fireflies – we have not seen them for decades because they are natural indicators of fresh air. Any urbanization, pollution or man-made irritants drive the beautiful insects away. This tour is at night, so its very dark. Best to just soak in the views as taking pictures would be useless.

Notes from our trip

Crystal Neri is a freelance writer who has worked across media platforms in places as diverse as US, Singapore, and Australia. She lives in Cebu City where she covers travel and entrepreneurship at crystalneri.com. Say Hi to her (@nericrystal) on Twitter and Instagram. Subscribe to her newsletter: